The Lord calls, whom he wills, to follow Him more closely; by following the three evangelical counsels of perfection in Christianity: Poverty, Chastity, and Obedience, for those who desire to become “perfect” (Mt 19:21). Year after year, generous young people around the world, answer the call of God and follow Him in the religious way of life traced out by select saintly founders raised by God. One such God-man is Don Bosco who lived and founded a religious congregation called the Salesians of Don Bosco in the 19th century, with a special call to work for the Youth.

This year, the Salesian Province of Chennai (INM) was blessed with 13 young people who decided to commit themselves to God in perpetuity, in the Don Bosco’s way of life; after having lived and experienced the Salesian way of life for at least six years.  Because of the pandemic situation, the immediate intensive preparation, leading to the perpetual profession was organized online for 20 days by the Province. Among the 13 brothers, three of them:   Br. Leo Manogharan Selvaraj, Br. Chinnadurai Lazar and Br.Yacop Pitchaimuthu belonged to the community of Sacred Heart College, Tirupattur, where they did their PG studies in MSW and in Counseling Psychology.

The online preparation course was organized by Rev. Fr. L. Don Bosco, the Vice Provincial of INM from 4th May through 16th May, 2021.  An hour of animation between 10 am to 11am was done on various themes related to Religious life (the Salesian Spirit, Constitutions, Community life, Evangelical Counsels, Spirituality, Salesian Ministry, Spiritual Direction, Psychology and Counseling).

After the preparatory programme, an immediate spiritual preparation, by way of Annual Retreat was undergone by the three clerics from 17th through 22nd May, 2021 along with the Salesian community at Sacred Heart College, Tirupattur, preached by Fr. John Britto SDB. As per the directions of the Provincial, the Perpetual Profession took place at the College itself. Following the travel restrictions imposed by the Govt. and the sober mood of the situation, a simple but solemn, well-prepared liturgical service was organized on May 24th at the famous Salesian Chapel of the college. During the Holy Eucharist, the three made their perpetual profession and committed themselves to live obedient, poor, and chaste in the presence of Rev. Fr. John Alexander, the Rector. Though the parents, relatives and friends of the three clerics were not present, the entire community of Salesians surrounded the three and joyfully accompanied them in their generous offering of themselves in perpetuity. At the end of the Mass, Cl. Leo thanked the community and others for their accompaniment, prayers and wishes. The Salesian community felicitated and welcomed the new, permanent members with Ponnadai and presented them with gifts. Group photos were taken to document the occasion and commit to memory. The Salesians, staff and students of Sacred Heart College, Tirupattur wish these three young, generous and talented Salesians, God’s choicest blessings as they move on to the next phase of intense preparation towards priesthood. 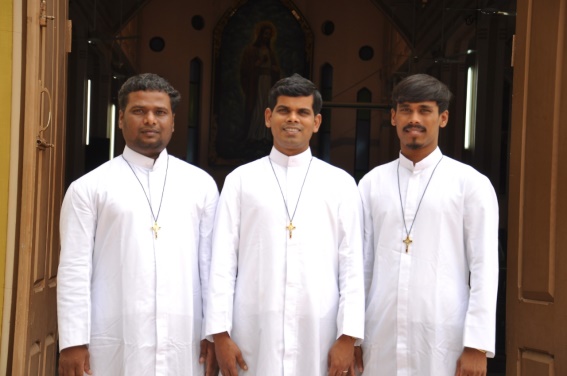 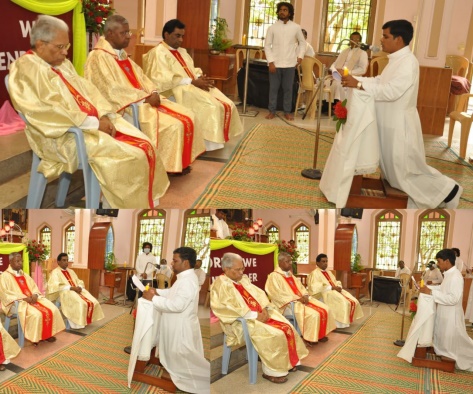 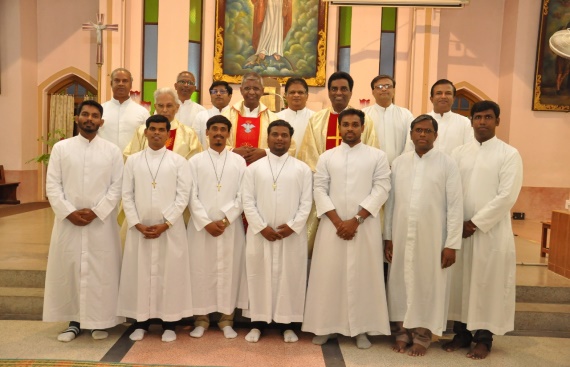